Shortly after I became chef at North Pond eight years ago, a journalist asked me how my food reflected the restaurant’s setting and architecture. I uncomfortably laughed off her question. How had my personal cooking style been influenced by the building’s design? She must have been kidding! I took the job at North Pond because I wanted to be the boss.

And North Pond seemed like a great place to be the boss. Set in a one-hundred-year-old, single-story glazed-brick building, the restaurant nestles into a hillside in Chicago’s picturesque Lincoln Park. The interiors were designed in the Arts and Crafts style, emphasizing the beauty of the materials. From the main dining room’s front doors, and beyond the North Pond, spreads a stunning view of Chicago’s skyline. 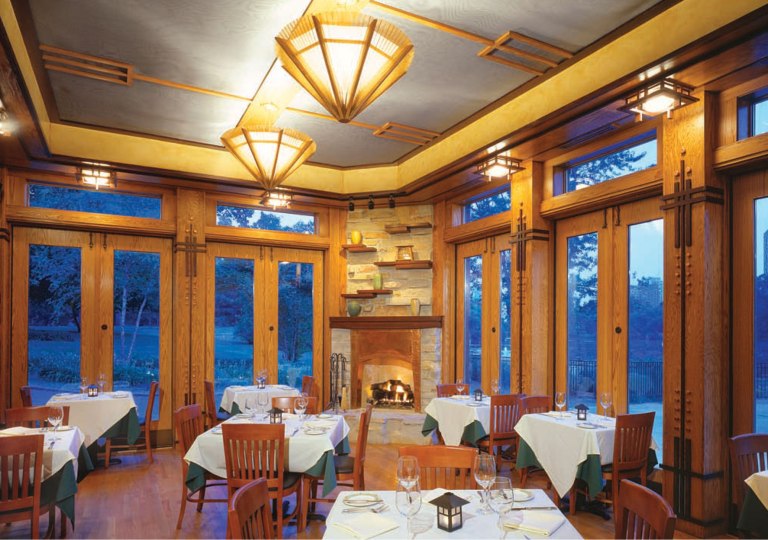 But my first year at North Pond gave me no time to ruminate about how Arts and Crafts windowpanes perfectly frame undulating hills. That first year was my first as an executive chef. I had to learn how to nurture (without coddling), to listen (without condescending), and to support the fragile health of an extended and typically dysfunctional restaurant family (financing cooks between paychecks is now a specialty of mine). Forget about any nobler notions; forget about “personal cooking style.” At the time, I had to concentrate on keeping an aging building upright, an inherited staff cohesive, and an existing clientele happy with the new chef and his menu.

After a couple of years I got the mechanics of being a chef down, but it wasn’t all smooth sailing. At one point, after a seemingly endless string of the strangest events—such as power outages in the midst of dinner service, servers disparaging the food to guests, and constant mechanical and structural breakdowns—I was convinced that the building had been constructed over a Native American burial ground. I was so convinced that I actually brought a shaman to the restaurant to placate the spirits I was certain lurked beneath it.

I don’t know whether the shaman helped, but things eventually did get better with both my staff and my customers, who invested ever greater trust in the kitchen. Mainly I got better at running a restaurant. I started making it a point to visit as many farms and farmers as possible, to see them on their own turf, and to bring my cooks and servers with me so that all of us could better understand that the food we serve has faces and families connected to it. I worked with my purveyors to get the finest seasonal and local ingredients. Most important, I attempted to cook in a way that elevated these raw materials—to place seasonality at the fore, to cook modern food with simplicity and integrity.

In retrospect, I can see that the reporter’s question, the one I found so preposterous at the time, was actually prescient. Even if North Pond’s surroundings haven’t exactly shaped me, they have certainly given me a framework within which to see my mission and a perfect setting in which to pursue it. I am not interested in “pushing the envelope” to do something no one else has dared to before. I see myself in a long line of Arts and Crafts practitioners—as an artisan working against heartless technology (or, in my case, soulless food). Here at the restaurant we strive every day to understand, hone, and refine ingredients and techniques that were discovered or developed long ago.

Just as the Arts and Crafts movement focused on craftsmanship to highlight the inherent qualities of the raw materials, so too does my cooking emphasize the beauty and flavor of the dish’s integral components. As I tell my cooks, as difficult as it might be for them to imagine, the farmers supplying our unparalleled ingredients often work harder, longer, under worse conditions, and for less money than we do. So we mustn’t do them the injustice of treating their products with anything less than respect. Over- or under-seasoning or cooking disregards the care that was taken at an earlier point in the supply chain. Overworking or over-adorning a dish is equally disrespectful, since it obscures true flavors and natures.

Nevertheless, as much as the space and particular site of the restaurant have influenced my food, I am also aware of a reciprocal effect. I think about how our work at North Pond has affected the building we call home. What originally had been designed for use only in winter as an ice skaters’ warming house has, since 1912, had many incarnations. Chili dogs and popsicles have given way to house-made sausages without buns and sorbets without sticks. As ever fewer members of the older generation make it back to the pond to reminisce about skating here in their youth (the pond rarely freezes these days due to pumps and other equipment that keep algae growth down), an entirely new group of diners now makes it a point to celebrate anniversaries and other significant occasions here because of what the restaurant has become. I’ve completely transformed the way people think about seasonal cuisine in relation to North Pond: once considered seasonal only for its opening and closing dates, the restaurant is now seen as seasonal for its food.

Were that reporter to ask me the same question today (and I still do hear it from time to time), my answer would surely be different. Does my food reflect the surroundings here at North Pond? Is she kidding? Of course it does! How could it be otherwise?